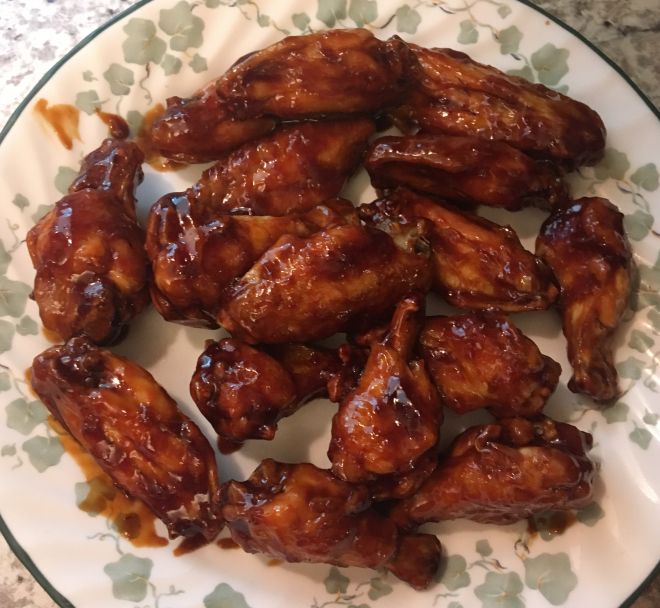 While waiting for the ten minute mark to flip the wings, gather your sauce ingredients and prepare a small skillet, a whisk, a mixing spoon and a medium sized bowl for use.

In the cold skillet, whisk the corn starch and soy sauce together until completely smooth.

With the skillet still cold, add the other ingredients to the soy sauce and whisk until well blended.

At ten minutes, flip the wings over and resume cooking. With about three minutes left to go, set the skillet on a medium heat burner and whisk continuously while the sauce comes up to a simmer.

When the wings reach 20 minutes, give the basket a good shake, spread the wings out evenly, and set the air fryer to 400 F, cook time 4 minutes.

Continue to simmer the sauce (bubbling and thick) whisking constantly for the four minutes until the wings are done.

Dump wings in a bowl, pour sauce on top, stir with a spoon until completely coated.

More Detailed Instructions (but not much)

Place a half flat of thawed wing sections in the basket of the air fryer. You don’t need any oil as long as your basket is non-stick, because we’re not trying to protect a flour or seasoning coating from coming off. The natural juices of the cooking wings will keep them from sticking. 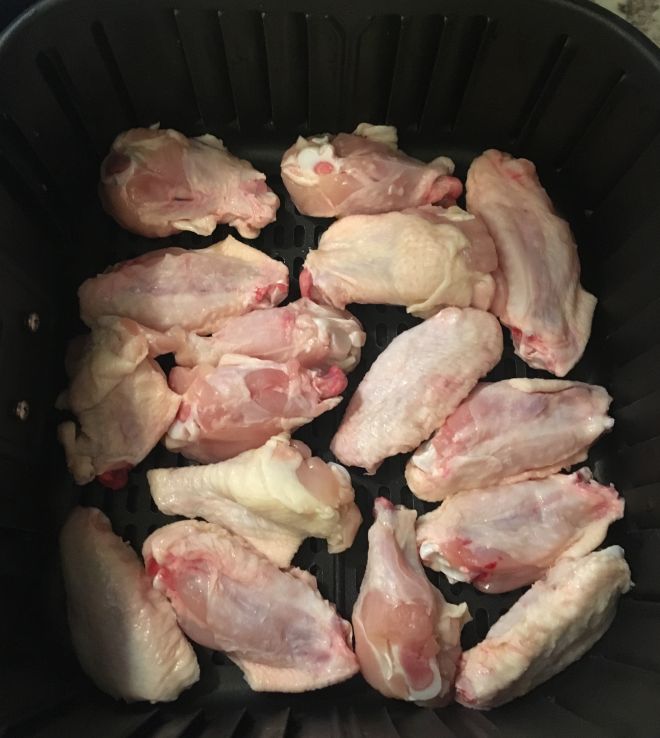 Set the air fryer to cook for 20 minutes at 370 F. This will get them cooked almost all the way through while not burning the outsides. We’ll crank it up to 400 F for another 4 minutes at the end, just to get the skin good and crispy to hold up to the sauce.

While the wings are cooking, assemble your sauce ingredients. 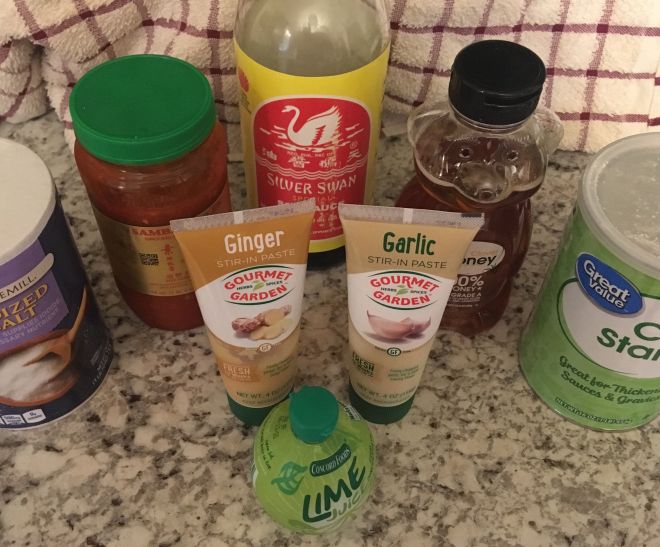 Now, I use sambal oelek for the chili part of the sweet chili sauce. You could use sriracha if you’d like, sriracha is already at a smooth consistency and has much of the same flavors. You could use it instead of sambal oelek right out of the bottle. The reason I don’t is that sriracha already has it’s own sweetness from sugar and has a few underlying flavors I’m not a big fan of. Personal preference only.  I prefer the richness of sambal oelek… but it’s a more chunky chili paste, and I don’t like the consistency in a sauce. So when I open a new jar of sambal oelek, I run it through the blender for a few minutes to blend it smooth, then it’s already smooth when I need to grab a few tablespoons later.

I also buy ginger and garlic paste to keep in the refrigerator. And jars of minced garlic, too. I make, damn, a lot of wings and many of my sauces call for ginger and garlic. After a while, I just got tired of always mincing or smoothing ginger root or garlic cloves into a paste when I could just grab a tube and squeeze out what I need in two seconds without cleaning a garlic press later. Do I recommend you do this? Depends on how lazy you are, and how long yours would sit in the refrigerator. I don’t know how long tubes or jars of garlic or ginger last, because it’s not around long enough for me to find out. I haven’t had any issues with the flavors or cooking with it, so I honestly can’t see why not to use them. I kinda suspect using all fresh everything is slightly pretentious when there are some alternatives, but I’m not a chef OR a cook, so what the heck do I know. Maybe I’m committing some horrible cooking sin. Wings still taste great though. 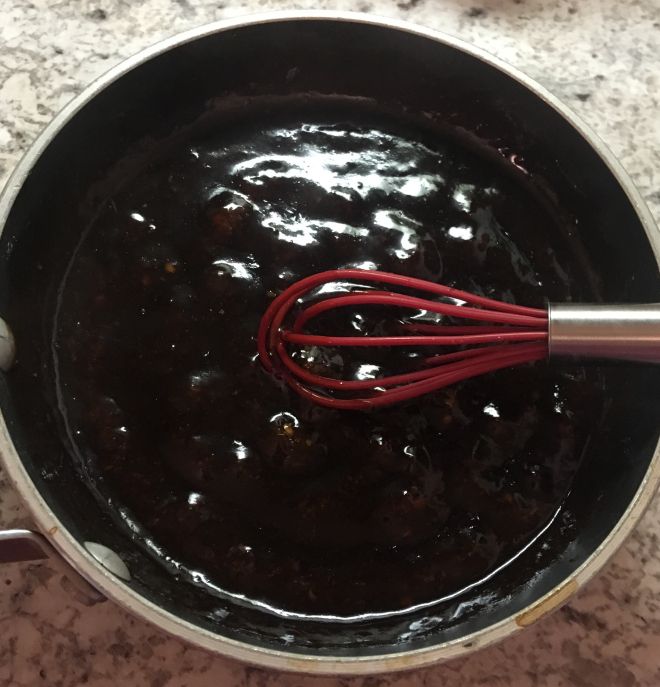 Once the wings are a few minutes out, get your sauce simmering, good slow thick bubbles while you whisk constantly over medium heat.  Overall, you’ll just be cooking the sauce about 6 or 7 minutes, simmering all the while. Should end up pretty thick and sticky.

Now, this sauce is pretty darn tasty on other things, like chicken nuggets, or even tonkatsu or chicken katsu instead of Bulldog katsu sauce, even on top of tacos. If you want to make more sauce and save some of it for later, just DO NOT ADD CORN STARCH and when it’s done cooking, pour and save the extra sauce in a jar and keep in the fridge. Should stay good for at least a week if you keep it refrigerated until you’re ready to use it. I’d advise warming it up instead of using it cold, though.

If you do that, AFTER you pour off your extra sauce, put the two teaspoons of corn starch in a small bowl by itself with some cold water, enough to whisk it until blended, and then add that to the sauce in the pan and simmer until thickened. That way you get your sticky sauce now and have your normal sauce to save in the fridge for later. 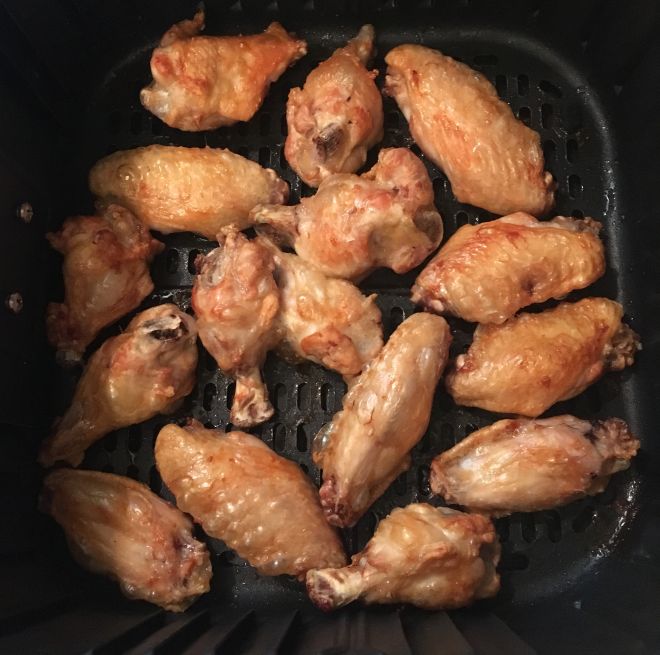 After 4 minutes at 400 F, the wings will be reasonably crispy. Just right for spinning in this sauce.

Place the wings in a bowl, dump your sauce on top, and swirl them around with a mixing spoon until well coated. 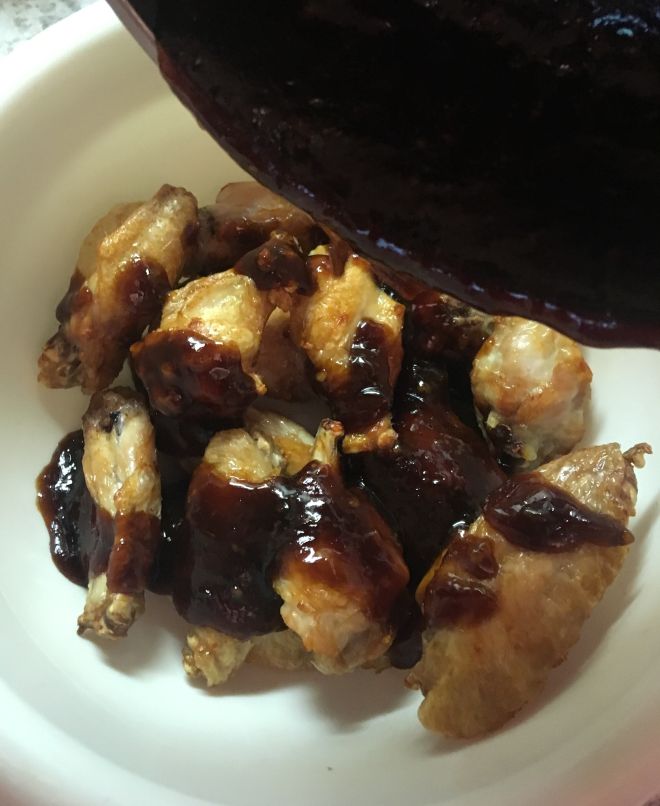 Any mixing spoon will do, even the burned wooden one I left on the stove top a little too long. 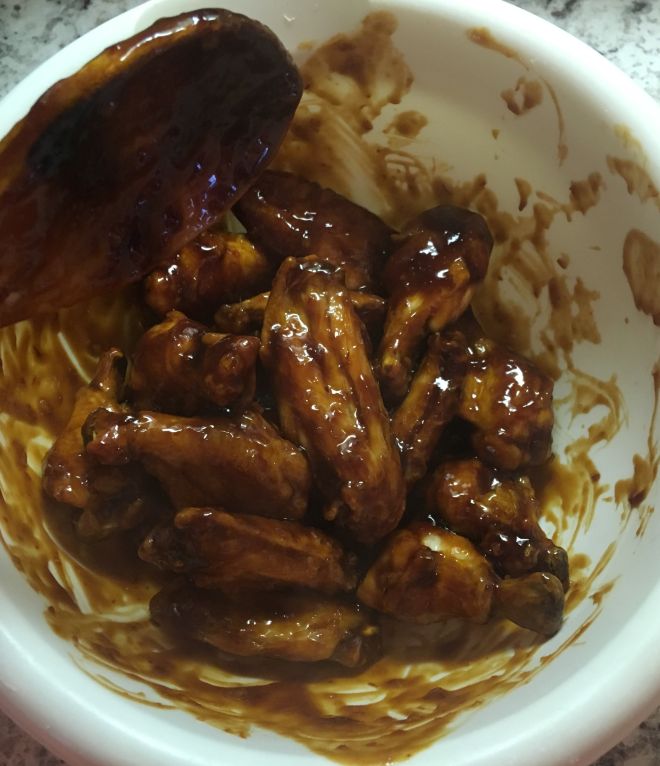 That’s it, ready to eat.

These are sweet but have a pretty solid kick to them. It’s only two tablespoons of sambal oelek, but don’t underestimate the power of that plus ginger. The best part is, the heat doesn’t linger. It’s sweet and hot right up front, then tapers off very quick with almost NO residual, lingering burn at all. It’s just right if you want to chow down on wings and feel the burn but don’t want to still have a burning mouth 15 minutes later.

I really like this one, I don’t make it them as often because it’s more involved than my dry rub wings.

I’ll be gone next weekend, so it’ll be two weeks until my next wing recipe, either sweet and sour wings or my dry rub. Or both, lol.

If you make these, let me know what you think, and if you have any suggestions for tweaks, okay?

This site uses Akismet to reduce spam. Learn how your comment data is processed.